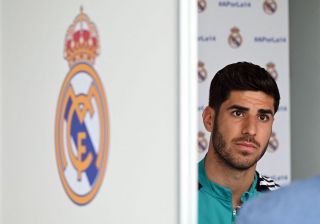 Real Madrid forward Marco Asensio has been linked with a move to Manchester United.

The right winger has scored the most goals of his career in La Liga this season, finding the back of the net on 10 occasions under Carlo Ancelotti, but at 26-years-old he has offered very little in the other aspects of his game.

With zero assists in the league, United would be signing an attacking player who is not renowned for scoring goals or registering assists. And I don’t see how that fixes any of our issues.

Asensio is heading into the final year of his contract and Marcos Benito has told El Chiringuito TV that Portuguese football agent Jorge Mendes wants to take the Spaniard to United this summer.

Asensio recently hired Mendes as his agent, as per AS, and in an attempt to see it from Madrid’s perspective, a player in the midst of contract discussions does not make such a decision in order to negotiate a straightforward deal.

It sounds like they are putting out feelers to other clubs, using Mendes’ connections in the game to get the best sporting and financial package possible. Welcome to silly season!

Real Madrid would be losing someone they consider a squad player – exactly like what is happening United this summer with Jesse Lingard, although the England international’s contract will expire later this month.

Asensio could revaluate his decision after Kylian Mbappe’s move to Madrid collapsed.

Let us know in the comments section if you would like to see Asensio at United next season?