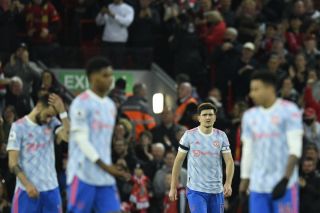 Harry Maguire’s place in the Manchester United starting eleven is reportedly in jeopardy ahead of the upcoming season, with new manager Erik ten Hag said to lead from the dugout in his first Premier League campaign.

The Dutchman will want to fix United’s problems in defence and midfield, but it sounds like that could be bad news for skipper Maguire, and his captaincy is also said to be on the line.

That is according to a new report from Sky Sports reporter Melissa Reddy.

She writes: “The club are open to offers for Aaron Wan-Bissaka, and Harry Maguire retaining his place in the starting XI – let alone the captain’s armband – is in jeopardy. Marcus Rashford has been horribly off form and Bruno Fernandes switched from a transformative figure to a largely frustrating one.”

Maguire came off the back of a strong Euro 2020 campaign, as England reached the final, but performed abysmally for United throughout the 2021/22 season.

There were reports that he could’ve lost the captaincy midway through the season, although it is understood that Ralf Rangnick didn’t want to upset an already fractured dressing room and another factor was Maguire’s confidence being low.

I wouldn’t be surprised if Ten Hag had reservations about Maguire’s ability to play in a high line, as he was always better suited when we played counter attacking football under Ole Gunnar Solskjaer.

Ten Hag needs to quickly decide what approach he is going to take with his new team.

Who will be in the running for the captaincy if Ten Hag takes the armband away from Maguire?

Only time will tell!

I’d imagine we’ll see Cristiano Ronaldo and Bruno Fernandes in the running, but I’m not sure about David de Gea because I have my doubts about the Spaniard shot-stopper’s long-term future under the new manager.

My guess would be Ronaldo because your captain doesn’t need to play every week when it’s not clear who the leader for the future is yet.