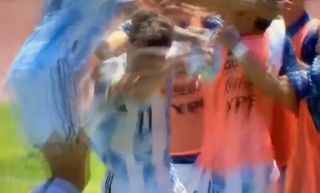 There’s a lot of excitement surrounding Manchester United starlet Alejandro Garnacho at the moment and he has just managed to score his first goal for Argentina U20s.

The Madrid-born young Argentina star is getting a chance to impress on the international stage and he is already making the most of it with a brilliant finish against Panama.

Just three minutes into the second half, Garnacho channels a challenging run into the box and beats his defender for pace before slotting the ball past the goalkeeper to make it 1-0.

He did this regularly throughout the season in United’s youth teams and it’s clear from the form he showed in the FA Youth Cup that he is a big game player.

In an ideal world, we could see Garnacho gets some minutes in the cup next season, but right now he should focus on his development rather than first team football.

It could be a huge two years for the youngster.