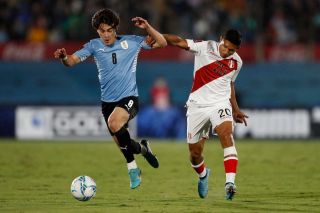 Uruguay head coach Diego Alonso has explained why Manchester United youngster Facundo Pellistri made his latest squad despite a lack of opportunities on loan at Deportivo Alaves this season.

“I thought that the characteristics that Pellistri has could help us a lot with the game that we want to implement. From there, I told him what I wanted from him, what I did value in him and then the one who gave the rest was him.

“He came here when he was 20-years-old, he put on the starting shirt of the senior team and he played the way he played. That speaks much better about him than about me.”

It didn’t surprise us because Pellistri has been selected regularly by Alonso in recent months, starting in three of their last four World Cup qualifiers, registering two assists in a 4-1 win over Venezuela.

He only made 21 appearances in La Liga this season, with only six of those coming as starts, so it would be a stretch to say he pulled up trees whilst on loan in Spain.

Edinson Cavani, who is set to leave United when his contract expires this month, has also been named in the squad. There’s also a place for transfer target Darwin Nunez.

Their first game is against Mexico on Friday.

Pellistri will now work on earning a place in the Uruguay squad for the upcoming World Cup in Qatar later this year. It would obviously help if he could get more minutes at club level next season, but surely that is unlikely to happen at United if Pellistri hasn’t been able to impress at Alaves?

While it’s a shame the young winger didn’t get much game time at Alaves this season, hopefully he can continue to impress at international in order to catch Erik ten Hag’s eye before the players return for pre-season.