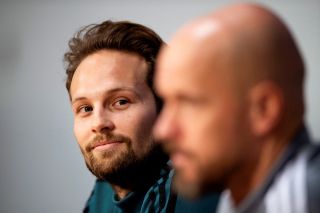 The versatile defender knows what it feels like to be at Old Trafford under a new manager, but more importantly, Blind knows more about Erik ten Hag than most of us after winning three Eredivisie titles under the fellow Dutchman.

Meanwhile, United are now stepping into another new era and Ten Hag will be the man to lead the charge.

Judging by how Blind assesses his former manager, it sounds like United will be getting a modern coach, who focusses on winning mentality in a controlling kind of way.

“A manager who loves to play attacking football, which is what Man United stands for, I think,” Blind told United Daily via ManUtd.com. “A manager who knows what he wants.

“To keep everyone on board and with the same direction to get that winning mentality and winning trophies.

“He wants to keep everything close, and I think he is also a control freak. He wants to be on top of everything.”

Everybody knows he will have his work cut out for him at Old Trafford, with a squad rebuild taking place in a bid to take the team back to the top, not just in England but Europe too.

To his credit, though, Ten Hag built two attractive young teams that reached the Champions League knockouts in recent years – managing to go all the way to the semi-finals in 2019.

Ten Hag’s first job will be to get United back into the Champions League and then to make us a regular force in Europe’s biggest competition.

That will be achieved year after year if the Reds can get back to competing for the Premier League, which needs to be the number one long-term objective for this football club.