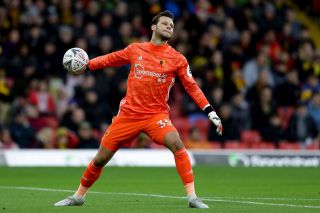 Dan Bachmann has been sounded out by Manchester United over a possible transfer this summer.

The 27-year-old Watford goalkeeper competes for a place in the team with former United shot-stopper Ben Foster and he is under contract at Vicarage Road until 2024.

It remains to be seen if United are genuinely interested, or if former interim manager Ralf Rangnick was simply preparing to manage Bachmann at international level for Austria.

Bachmann, however, has confirmed there has been contact from United.

He told Sky Sports Austria: “There has been contact with Manchester United. It hasn’t just fallen out of the sky. I don’t know whether the team boss [Rangnick] has a say in transfer matters.

“Several clubs have shown interest in me – but the most intensive contacts have come from Manchester. It is a massive honour for a club like that to be interested in you.

“I would be second choice behind David de Gea, who has been one of the Premier League’s best keepers for years.

“But anything can happen in football. The performances principle applies. As a result, even big stars can sit on the sub’s bench.”

Bechmann has been at Watford since 2017 and it sounds like he could be on the move this summer, especially as Foster is first choice at Watford.

Moreover, United announced earlier this week that Rangnick would leave the club rather than move into a consultancy role, so perhaps our interest in Bechmann has already come to an end.

Although Rangnick failed in his short-term role as manager at United, I feared we would never see him make a difference unless it was at a higher level at the club.

It only makes sense to sign Bachmann as a backup option if Dean Henderson leaves this summer.