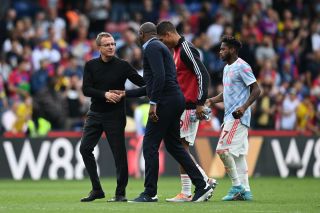 I will be honest, when Manchester United appointed Ralf Rangnick as their manager, I was excited about what was to come. He had excelled in his interview and had a clear view of how United should be managed towards success. Fast forward to his last game in charge, again, I will be honest, it was kind of relieving.

It was a difficult period for him, for the players and us fans as well. Reports of Ole Gunnar Solskjaer and his backroom staff’s incompetence to train were substituted with players questioning the manager once again. Despite my anger towards these players, it’s time we discussed Rangnick.

Despite of the excitement of having a manager like the German, a thought has always stuck there with me, with the fact that Milan signed a deal with him and ditched it for a new project with Stefano Pioli, which so far seems to be a great deal given that they won a Serie A title for the first time in 11 years.

What makes United and Milan different anyway? My concern with United lies with the owners and how the situation has not changed on the back of false promises. People who are at the club seem afraid to speak against them and no one seems to be demanding change.

Look at Milan and see how this is completely different. Football people take care of the football aspect of the club and they don’t let bankers try enforce their rules in the new signings. This may have changed with Ed Woodward’s departure, but I want a Director of Football who is not afraid to tell the owners what is wrong and how things should be done.

A few years ago when Milan were still looking for a new identity, Maldini’s interview impacted me deeply. He had targeted Milan’s owners at the time and the fact that they were destroying the legacy that he and many legends had built at the club. While here, just a few legends have reacted and they haven’t had the impact that Maldini had.

I said earlier that I’d speak about Rangnick, yet here we are discussing the owners. Well, this has a lot to do with what I am trying to say. Rangnick was appointed to ease the process of rebuilding for whomever took the manager’s job and then he’d consult him and the club on various subjects.

First, he went for the Austria job which left some of us in shock but we came to accepting this by the feeling that the new manager would want to make some decisions on his own. However, the news that he will no longer even be staying as a part-time consultant was a bit baffling and makes me think about his intentions in the first place.

Did he offer himself to manage United after the interim period came to an end? Was he unhappy or was he asked about Ten Hag as a choice for the manager’s role? Whatever answers these questions have, maybe not sticking with Rangnick might turn out a good choice.

Big clubs need a little of club’s history in their project even if it’s just a little. Looking at Milan they have little bit of everything. Owners that actually show up, a living legend that did not bow to anyone’s demanding wages and ran their contracts down even if it meant he’d lose key players; then there’s the sporting director who’s been working with small deals but that have turned out massive for the title win and many more, that in their essence have one single aim, get the team where it belongs.

They took their first step by rejecting Rangnick and trusting people who worked hard in difficult seasons. Maybe this is what we need. Sometimes I feel like we focus way too much on glorifying things rather acting up. Appointing Ten Hag is the sign that maybe things will finally change, but a manager like Ten Hag needs a board of directors who have his back, who are football people, whose main interest is not milking money from the club.

What happened this season in the Serie A showed us that sticking with your people, getting people who love the game and modernise the way to achieve new things, is actually the right way to go. Juventus did it, Inter with Zanetti as well and Milan with Maldini. Getting your people to work closely with passionate managers might be the way to go.

As for Ralf, wish him all the best with the Austria job, but he has been a complete let down. You just don’t have a clear project on how to fix things with the board and then abandon the ship. A lot more must have been going on behind the scenes, but this didn’t leave good taste, at all.

One response to “Manchester United, AC Milan and the attempted Rangnick era”