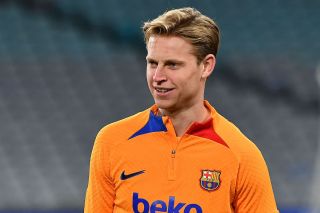 Manchester United have been heavily linked with several midfielders this summer but Barcelona midfielder Frenkie de Jong has been rumoured to be one of Erik ten Hag’s top targets.

The 53-year-old worked with De Jong at Ajax and the pair spearheaded the Amsterdam club’s extraordinary run to the 2019 Champions League semi-finals, which caught the eye of most European superclubs.

That fearless Ajax side has been dismantled since then and De Jong is currently plying his trade at Barcelona but the Spanish club’s economic issues could force them into a sale.

Earlier this month, Barcelona manager Xavi Hernandez admitted that although he would prefer De Jong to stay at the club, he did not rule out the potential sale of their prized asset.

Now, the 25-year-old has addressed rumours of his exit himself and confirmed that he wants to stay at Barcelona.

SN’s verdict…
Manchester United’s interest in De Jong is clear and Ten Hag would understandably be keen to bring in his trusted ally but if he’s not 100% sold on the idea of joining United, a deal should be scrapped.

United have made the mistake of signing players who don’t want to come before, with Angel di Maria’s ill-advised move in 2014 being the prime example.

Alexis Sanchez, who endured a disastrous 18 months at the club, is another player who looked to have his eyes on the exit before kicking a ball.