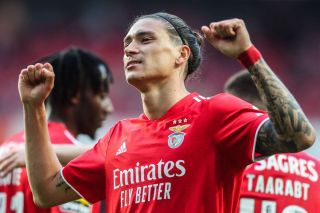 Manchester United are in the market for a striker this summer, with one senior player in that department already confirmed to be leaving. Edinson Cavani’s contract runs out next month and the Uruguayan has already said his goodbyes.

In addition to Cavani’s imminent departure, there are also question marks over the futures of Cristiano Ronaldo and Anthony Martial, and there has been little clarity on Mason Greenwood’s situation.

Marcus Rashford’s dramatic drop in form has been puzzling but according to some reports, Erik ten Hag could be set to test him in a new position this summer.

Benfica star Darwin Nunez has caught the attention of most European superclubs with his 26 goals in the Portuguese league this season and is set to be one of the hottest properties this summer.

The 22-year-old has been heavily linked with a move to Old Trafford and now, there are claims that a deal is being pursued by Manchester United. That’s according to TalkSPORT, who add that Benfica have put a whopping £68m price tag on their prized asset.

As per the report, Nunez is said to be ‘keen’ on being a part of Ten Hag’s revolution this summer, with wholesale changes expected under the Dutchman. Liverpool, who are facing the prospect of losing talisman Sadio Mane, have also been linked with the striker.

SN’s verdict…
Should the club succeed in bringing Nunez to Old Trafford without the lure of Champions League football, it would be seen as a huge coup. Nunez is one of the most prolific strikers in Europe despite turning just 23 next month.

At international level, he is already seen as a ready-made replacement for Cavani, who is expected to retire from international football sooner rather than later.

A transfer could, however, dent United’s transfer budget this summer and they will be keen to bring the cost down.