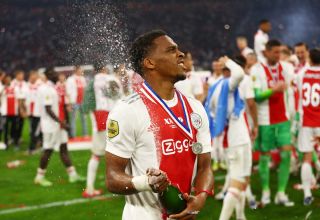 There’s a Dutch theme to Manchester United’s wishlist this summer, with Erik ten Hag’s arrival seeing a spike in links to Dutch players. Frenkie de Jong, the Barcelona midfielder, has been heavily linked with a move to Old Trafford.

Ajax defender Jurrien Timber is another player who has been the subject of extensive links and recent reports suggest that United are making progress in a move for the 20-year-old.

Timber enjoyed his breakthrough season under Ten Hag this year and it comes to little surprise that the 53-year-old wants the exciting youngster to follow him to Old Trafford.

Ahead of the Netherlands’ set of international games next month, he was quizzed on rumours of his exit and although he admitted that a prolonged stay in the Dutch capital is possible, he did not rule out an exit.

“Of course I can develop further at Ajax – I am 100 percent sure of that,” he is quoted as saying by the Metro. “I don’t feel like I’m done at the club. But I can also develop at other clubs.

“I am now focusing on the upcoming international matches and then go on holiday. Then I’ll have to think about it some more. In the end, my gut feeling will be the deciding factor.

“The picture has to be right. You can go to a big club. But if you’re not going to play there, it’s better to stay with Ajax. And Ajax is also a big club.”

SN’s verdict…
Recently, rumours of Manchester United’s interest in Timber have intensified and as Ten Hag continues to pull the strings, there’s very little to suggest that links will be coming to a halt anytime soon.

Timber’s versatility is one of his many strengths and is most likely one of the reasons Ten Hag is so keen on making him his first signing at Old Trafford.

The Netherlands international is most comfortable at centre-back but has experience at right-back, whilst he can also play in central midfield – an area United are desperate to strengthen.