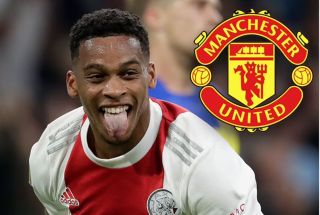 The reports since Erik ten Hag’s arrival have suggested that the new manager wants to sign a central defender this summer. It is understood that efforts are being made to make Ajax’s Jurrien Timber one of the club’s first signings of the summer.

After signing Raphael Varane last summer, we didn’t quite see any improvement in defence this season, and the Frenchman doesn’t take all of the blame for that. His fitness was a concern all season and everyone else in defence underperformed.

Ajax’s promising defender Timber could come in and help Ten Hag, as a player he knows, in the manager’s bid to sort out United’s defence.

From reading reports throughout Europe about Timber, it looked like he was headed to Bayern Munich before United’s interest became clear. Ten Hag clearly rates him and it bodes well for us that he can play in a number of positions: centre-back, right-back and defensive midfield.

That said, the 20-year-old is not the only central defender to be linked with a switch to United this summer. Villarreal’s Pau Torres became a target last year but United opted to sign Varane instead. He would cost more than Timber, but I think the club should be signing both.

The latest update from Jamie Jackson suggests that the player is keen on a move to United this summer – despite claims Ajax have made him a new offer to stay at the club.

Timber, unlike F D Jong (at moment), is warm on a move to @manutd…

According to The Guardian journalist, Timber is “warm” on joining the Red Devils, but he states that is not the case for midfield target Frenkie de Jong.

Jackson previously reported that Ajax value Timber at £43m which is a pricy investment for such a young player, but let’s not forget how he has won two Eredivisie titles under Ten Hag and is tipped to be part of Louis van Gaal’s Netherlands squad at the World Cup.

It sounds like this one could be a runner.

It would be a first mistake for Ten Hag to sign a player who doesn’t want to play for Manchester United.

Just because it appears like Barcelona are trying to force the Netherlands star out the door, United would be asking for more problems in the dressing room by signing a player who may have his heart set on playing his football in the Champions League next season.

United need players who are going to put a real shift in next season.

We’ve seen managers sign players who were unsure about coming to United in the past and it always ends ugly.

Unless the players joining have it in them to make a real difference, it will only show if they put the work in on the pitch. Why on earth would United invest £70m+ in another midfielder who isn’t ‘warm’ on coming in the first place?

The club should learn from their mistakes and look elsewhere in the midfield market, even though there is no denying that De Jong is a top player. Just not for us in this moment of time.