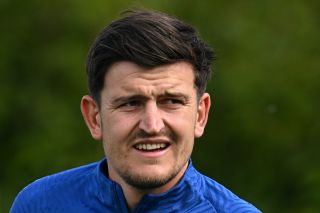 Manchester United skipper Harry Maguire and his family were at the centre of a bomb threat in April when police investigated allegations of an explosive device at the footballer’s home.

In hindsight, you won’t be surprised to hear that was the low point in a turbulent season for the England defender, who has been the subject of heavy criticism on the back of United’s bad form.

It wasn’t just United, though. England fans actually booed him at Wembley earlier this year, despite the fact Maguire usually performs well for his country.

Maguire was understandably “shaken”, and his family had to move out of the house for a few days until police declared it safe. He will accept criticism at all costs – but says the bomb threat was a step over the line.

“We know we are under the most scrutiny. I totally accept criticism when we concede goals or make mistakes, I’m big enough to accept people getting on my back and saying I can improve. There is a line where are human beings, I do have a family. People ask if it affects me. My mentality is that it doesn’t affect me too much but when it comes to bomb threats, it is more about family.

“My fiancee Fern, I’m just happy my kids are at an age where they don’t read things and see things on the news. If my kids were an older age, they could see things and go to school and people are speaking about it, that is when it affects you a little bit more.”

“The journey I have been on since my debut five years ago to now I have had amazing times with the fans, and I am not going to let the minority, I don’t know how many it was, 10-20 people doing that in the Ivory Coast game to affect my relationship with the England fans, no.

“I think I was more surprised rather than taking it all in, I was a bit shocked to be honest. Like I said, I’ve had such a good relationship with the England fans throughout my journey with the England team.

“I wouldn’t say I was hurt and upset. Obviously I know my family and my friends might have been affected by it but I was more surprised really.

“There was a lot of young lads in the team that day, a lot of young people in the stands, lots of kids watching who inspire to grow up and be an England footballer so for them to hear that for somebody who’s been involved in a such a big part of the journey over the last five years, it’s sad to see.

“But I’m sure there will be many good times ahead when the England fans will show again their support and love because I’ve been an England fan in my time, I’ve been to the Euros and followed them in France and I know how passionate and how supportive they are of their country.”

It remains to be seen if Maguire can rediscover his best form in a United shirt under Ten Hag.

Some fans think he is running out of time, but I will never agree with booing one of your own but it wasn’t the first time England fans embarrassed themselves.