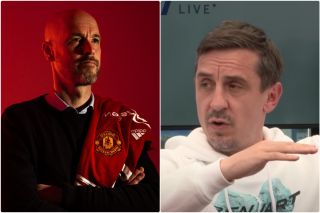 The footballer turned pundit is concerned over a multiple of factors standing in the Dutchman’s way at Old Trafford.

Speaking on the latest episode of The Overlap, Gary Neville said: “My biggest fear for Erik ten Hag is not the job that he’ll do, he could do a great job and still not succeed by the fact of Pep Guardiola and Jurgen Klopp. If them two stay there, it’s a real problem.

He added: “I wasn’t against an interim manager because I thought [in November] that the right manager wasn’t available. It went horribly wrong with Ralf Rangnick. You’re even questioning him and decisions he’s made.

“The reality of it is that it’s bigger than that. We’re all optimistic of a new manager, but I’m very cautious in my optimism, I don’t think there’s many Manchester United fans sat thinking ‘here we go’. It’s almost cautiously optimistic.”

Watch the full episode below – The Overlap Live Fan Debate 4.0 with Gary Neville & Jamie Carragher | The End of Season Special

Although I am sure Ten Hag is excited about the prospect of battling with Guardiola and Klopp, as well as Chelsea’s Thomas Tuchel, the Dutchman will not be expected to deliver the Premier League title straight away. The first step is getting United back into the Champions League.

Ten Hag even said he can break the Premier League monopoly of Guardiola and Klopp after being officially unveiled as United’s new manager. He told reporters, as per The Mirror: “I admire them both, Manchester United and Liverpool. They both play fantastic football. But you will always see an era come to an end. I’ve already met big coaches and big teams in the Premier League and I know how to deal with that. But it’s clear, the Premier League is the biggest league in the world I think and I’m looking forward to battling with them.”

When asked if their dominance can be ended before Guardiola and Klopp leave their current roles, Ten Hag added: “Yes, I think so. We have to set clear purposes, you need people who have a positive attitude. Players dictate the way of play, when I have the idea, I will line-up with my best team and get the best out of them to make them feel comfortable. It is about getting success together.

“We are set in the process before the season starts. I am still in the process of observing and analyzing, I will set conclusions, but I keep it for myself. The confidence is that I have a good feeling with the people around the meetings.

“We have a plan and now it is to co-operate and achieve the success we want to. The plan is huge, you will see.”

Moreover, Neville right on fans being cautiously optimistic. Ten Hag is an extremely exciting coach who arrives with three Eredivisie titles under his belt, but he is also stepping into a much stronger league and we know there will be bumps along the way.

Let us know in the comments section how you are feeling about Ten Hag as United’s new manager?