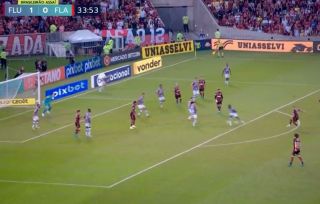 The Brazil international joined United’s academy as a teenager and has 75 appearances to his name for the first team, but then Ole Gunnar Solskjaer decided Pereira was surplus to requirements and sent him on loan.

Pereira was in the starting line-up last night and equalised in the 34th minute with a powerful effort from the edge of the box.

It was his first goal for the club since November.

Footage below, courtesy of CBS Sports:

What a time to get your first goal of the Brasileirão season. 👍 pic.twitter.com/tNPPdTXfvg

However, the 26-year-old went on to assist Gabriel Garbosa’s winner in the second half to see Flamengo move to 8th in Brazil’s top division.

WHO ELSE BUT GABI. 🔥

It doesn’t sound like Pereira has a future at Flamengo because the Brazilian club are struggling to come up with the money to strike a deal.

A return to United would be a shock as I think we’ve already learned that he isn’t cut out for the Premier League, but he could make a move to another club in Europe.