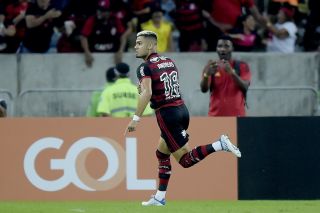 The future of Andreas Pereira is up in the air right now.

According to the player’s agent, Guiliano Bertolucci, a deal with Flamengo has collapsed the Manchester United midfielder will return to Europe. He said (as quoted by Fabrizio Romano): “He’s gonna return to European football.”

The agreement between Flamengo and Man United to keep Pereira has definitely collapsed.

The Brazil international made 45 appearances in all competitions for Flamengo and directly contributed to 9 goals, with the latest coming from a powerful effort in last night’s Rio de Janeiro derby.

Pereira was seemingly close to joining Flamengo on a permanent deal, but a deal was stalled, and manager Paulo Sousa has made it clear that he’d like to keep him.

Sousa said (via Lance): “Of all those that we have, I would like this continuity that I have already expressed. We’ve already spoken to Bruno, but it’s not just up to us, it’s up to the player, the club. In the game against Catolica, Andreas played an extraordinary game and now he was decisive.”

Either way, it sounds like Pereira will be returning to Europe this summer.

Erik ten Hag is set to make a number of changes to his squad this summer. Right now, I’m interested to see if Pereira will get a chance – like others – to prove himself to the new manager on pre-season tour.

Or is it time to finally sell Pereira?