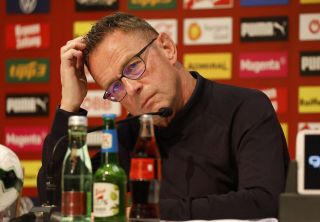 Ralf Rangnick had a disappointing spell in charge of Manchester United as interim manager.

The German will now take charge of Austria’s national team instead of working as a consultant at United, which was an arrangement that we thought would see Rangnick work at the club for at least two more years.

Erik ten Hag has already been appointed as the new manager however, it became clear that it was not his decision whether Rangnick would remain at the club. The Dutchman stressed that was a decision the club had to make.

According to the Telegraph, Ten Hag has held talks with Rangnick about the state of the team, with the pair spending two hours on a call.

Rangnick has been honest about the players since he took the job at Old Trafford, so I’m sure he gave a brutal assessment to the new boss.

The report adds that Rangnick became increasingly concerned at how well the current group of players gel together after years of ‘muddled thinking’ in the transfer market. Figures at the club may have changed their tune on Rangnick after United’s season went from bad to worse after Ole Gunnar Solskjaer’s dismissal.

United suddenly believe they can build for the future without Rangnick’s influence on football matters. I hope they’re right but he wasn’t a very good manager.