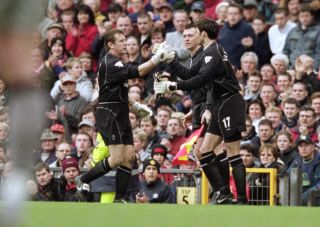 Former Manchester United, Rangers and Scotland goalkeeper Andy Goram has revealed he has been diagnosed with terminal cancer.

The 58-year-old has confirmed in an interview with the Daily Record that he has been given approximately six months to live by doctors after declining the chance of chemotherapy.

The chemo in question could potentially extend his life by a further three points, but he turned it down after seeing how ill it made his ex-wife during her own sickness.

Goram had a loan spell at Old Trafford from Motherwell in 2001, making two appearances, when he famously fell out with Roy Keane.

He joined the club after Fabien Barthez and Raimond van der Gouw both picked up injuries ahead of a Champions League tie against Bayern Munich.

The two games he played both ended with him being substituted – a 4-2 win against Coventry and 2-1 defeat at Southampton.

Moreover, the Reds went on to win the Premier League title that season.

Manchester United have written a statement on the club’s official website to send Goram their best wishes.

It reads: “Everybody at Manchester United is thinking of Andy Goram and his family after our former goalkeeper announced he has terminal cancer.

“The 58-year-old is best known for playing 184 times with Rangers, where he proudly won five league titles and five domestic cups. He later joined United on loan in the 2000/01 season and made two appearances in the Premier League title run-in.

“Sir Alex Ferguson had always been a fan of the man nicknamed ‘The Goalie’ since handing him the first of 43 Scotland caps in 1985, before taking him to the 1986 World Cup in Mexico.

“Goram’s cancer was announced in April and, tragically, he has now confirmed he has only six months left to live. Andy has bravely turned down the chance of chemotherapy after witnessing how ill it made his ex-wife Miriam, who battled cancer last year.

“Andy, everyone at United is thinking of you and sending you strength at this difficult time.”

We echo United’s statement on Goram.