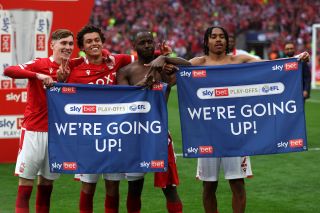 Manchester United loanee James Garner was a star player in Nottingham Forest’s squad this season and they pulled off a historic win over Huffersfield Town in the Championship play-off final at Wembley.

The 21-year-old central midfield assisted the game’s only game when he sent a dangerous cross into the box, only for Chelsea loanee Levi Colwill to kick the ball into his own net.

Anyone who watched the play-off final will tell you Forest were fortunate with a number of penalty decisions and that Garner’s contributions were not limited to creating the only goal.

Without Garner this season, Forest fans will always ask if the dream would have been possible? It’s a fair question because our academy graduate had a huge influence on Steve Cooper’s side this term.

Played a key role in the win and promotion. 🔴👏 pic.twitter.com/CYSVKCXLpM

Garner won 100% of his tackles and ground duels, not to mention a 100% success rate at dribbling.

United fans should be excited to see if Erik ten Hag decides to keep the talented midfielder for the upcoming campaign. With the current problems in midfield, it would be a shame not to give Garner a chance — even on pre-season this summer.

Let us know in the comments section if you think United should keep Garner next season?