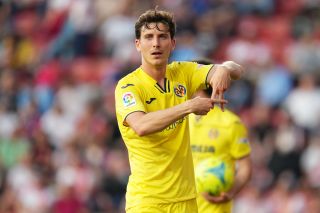 Villarreal centre-back Pau Torres insists the only offer on the table for him to sign is from his current club as rumours continue about a potential move to Manchester United.

The Spain international was initially linked with a switch to Old Trafford last summer, but a deal never materialised because United opted to sign Raphael Varane instead.

However, with the arrival of Erik ten Hag, there’s no doubt the new manager will want to completely overhaul the squad after such a disappointing season. He would be naïve to think the Glazers will back him to get everything done in one summer, though.

Spanish publication Cadena Ser claims Torres’ representatives have travelled to the UK to discuss a deal before an agreement had been reached with the player. The headline states ‘Pau Torres could play for Manchester United next season’, as seen below.

Torres has since rubbished these claims in an interview with Spanish newspaper AS, as cited by the Daily Mail, saying: ‘Right now there is nothing at all, there is talk of many things like every year, I have peace of mind of being where they want me, at the club of my life and I have this offer right now that I value as very positive.

‘There is nothing right now, the only thing I have is the offer from Villarreal, so I am very calm.’

I try not to read too much into these things, but Torres doesn’t state that he plans to sign a new contract at Villarreal. He only says one has been offered.

That said, I don’t think this gives United fans a reason to get excited over signing the Villarreal star because Torres isn’t the only defender heavily linked with a move to United this summer.

Ajax starlet Jurrien Timber is another name to keep an eye on.