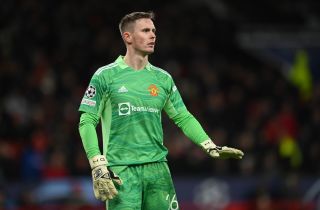 Manchester United goalkeeper Dean Henderson has been linked with a move away from the club since last summer and the 25-year-old is looking likely to leave this year.

Henderson has made just three appearances in all competitions this season – one in each cup competition. David de Gea’s tremendous form has left very little room for the Englishman to feature and despite signing a long-term contract in 2020, he’s now closer to the exit than dislodging De Gea as the side’s number one.

Last month, Stretty News revealed that Henderson was eyeing an exit this summer as he looks to resurrect his career, having found himself on the periphery for club and country.

Now, there are further suggestions that he could leave and Newcastle, who have enjoyed a stellar second half of the season under Eddie Howe, are reportedly confident of signing him.

That’s according to the Northern Echo, who says that amid Howe’s desire to reshuffle his pack of goalkeepers, Henderson has emerged as the number one target for the position.

After missing out on the signing in January, it’s now believed that Newcastle will be making a formal approach for Henderson in the coming weeks as they look to bring their top target in.

As per the report, Ten Hag has ‘thrown his backing’ behind veteran keeper De Gea and Henderson has accepted that the time to leave has come. Newcastle are said to be preparing a £15m offer and the Tyneside club are hopeful that an agreement can be reached swiftly.

SN’s verdict…
Henderson’s career has, unfortunately, taken a nosedive after ending the 2020/21 season as the first-choice goalkeeper under Ole Gunnar Solskjaer.

He would also have been hoping for some involvement in that summer’s European Championship but injury ruled him out of the tournament before COVID-19 disrupted his pre-season preparations.

Since then, De Gea has wound back the clock and a way back for Henderson is unlikely, leaving an exit as the only viable option.