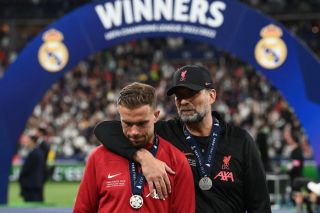 Liverpool suffered defeat in the Champions League final against Real Madrid to end their season in disappointing fashion.

They didn’t win the quadruple that they spent the past 5 months talking about and only ended up with FA Cup and Carabao Cup.

That means Manchester United’s record as the only English football club in history to win the treble will go untouched for another year.

Liverpool’s defeat led to United fans jumping on social media. Here are some of the best reactions:

Never forget that Liverpool didn't score a single goal in 3 finals this season, the same season they claimed they're winning the quadruple 😂😂😂😂😂

Last night showed exactly why talking about greatness should happen after the fact. Klopp and Liverpool failed in the 2 biggest competitions they were in, 2nd is the first loser.

It’s still outright disrespectful any comparisons to this man have ever been made at any point. pic.twitter.com/kZdlhgif5X

I think the team that won their league and beat PSG, Chelsea, City and Liverpool might be the best in Europe.

Literally the high point of our season was Liverpool not winning the League and them losing the Champions League. The quicker Ten Hag sorts this mess out the better.