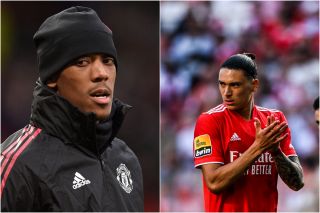 Manchester United are in the market for a striker this season, with the departure of Edinson Cavani leaving a gaping hole in the Old Trafford club’s attack.

There are also question marks over Cristiano Ronaldo’s future, with the 37-year-old yet to confirm whether he will be staying for the second term of his contract.

Marcus Rashford’s dramatic drop in form has also been a contributing factor as the club looks to bolster its frontline, with Benfica striker Darwin Nunez among the targets.

The Uruguayan has been linked with a host of top European clubs but Manchester United are said to hold an interest and according to reports, they could be about to offer the Portuguese club a swap deal, with Anthony Martial moving in the other direction.

That’s according to journalist Ekrem Konur, who say that amid United’s consideration of signing Nunez, they are now preparing to submit an offer that would see Martial move to Benfica, plus cash.

Martial has experienced a disastrous six-month spell at Sevilla since joining the Spanish club on loan and is expected to return to United this summer. The Frenchman will be assessed by manager Erik ten Hag before any final decision is made but he is likely to be sold.

SN’s verdict…
Regardless of whether Ronaldo stays at the club, signing a striker is paramount for United. Ronaldo is the club’s only out-and-out forward and he is guaranteed to be leaving within 12 months.

Nunez scored 26 goals in just 28 appearances in the league for Benfica this season – an astonishing return considering just 24 of those games were started.

A move is, however, unlikely to be cheap as Nunez is coveted by other clubs as well. Furthermore, United could have trouble convincing him to reject those clubs, with Champions League football not available at Old Trafford for at least another year.