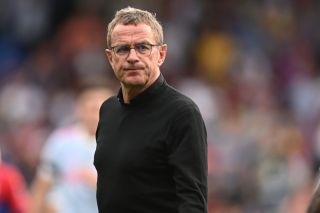 Former Manchester United interim boss Ralf Rangnick will not follow through on the two-year advisory role he agreed upon when he took over last December, it has been confirmed.

The 63-year-old took charge of the side on an interim basis following Ole Gunnar Solskjaer’s sacking and was supposed to stay on as a consultant until 2024. That has now been scrapped, with the German manager confirming the news in a press conference.

The decision to scrap the role is believed to have come due to his obligations as Austria manager, a job he accepted before the end of his term as interim manager at Old Trafford.

The news was confirmed by Manchester United on their official website, with the club making a short statement on the development.

Read more: Man Utd to include Anthony Martial in offer for star striker

“We would like to thank Ralf Rangnick for his efforts as interim manager over the past six months,” the statement read. “By mutual agreement, Ralf will now focus solely on his new role as manager of the Austria national team and will not therefore be taking up a consultancy role at Old Trafford.

“We would like to wish Ralf the best of luck in this next chapter of his career.”

SN’s verdict…
The disastrous final six months of the season were incredibly challenging for supporters and although it was common knowledge that a new coach would be walking through the Carrington doors, the expectation was always that he would be working closely with Rangnick.

Rangnick has enjoyed most of his success as an executive and it felt like the ability to tap into that knowledge was a powerful tool for United, who have previously failed to make the right footballing decisions.

Exactly why this decision has been taken remains to be seen but only as recently as this month, Rangnick has spoken about how eager was to speak with Erik ten Hag over their working relationship. It’s the latest episode in a horrible season.