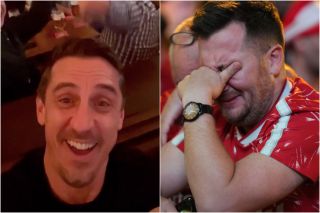 Just over a week ago, the disastrous scenario of Liverpool winning the quadruple was a serious possibility but Jurgen Klopp’s ‘mentality monsters’ ended up scoring in none of the three finals they reached this season.

The pride attached to Manchester United’s treble is intact amid Real Madrid’s comprehensive victory over Liverpool in the Champions League final.

Gary Neville, the former United captain, was in good form on social media as he made sure to let everyone know how the 90-minute affair in Paris was the perfect end to the season.

As Neville points out, there is absolutely no shame in reveling in Liverpool’s loss. In truth, the knowledge of another side failing to match the Reds’ incredible 1998/99 season is far more satisfying.