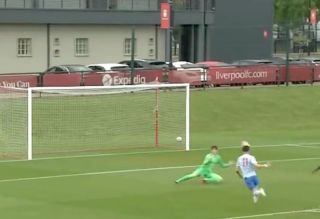 Alejandro Garnacho’s sublime chip against Liverpool U23s has been voted as Manchester United’s Goal of the Month for May.

After recently being called up to the Argentina squad, Garnacho was named United U18s’ Player of the Year before the memorable FA Youth Cup final win over Nottingham Forest at Old Trafford.

The 17-year-old scored two goals in the FA Youth Cup, but his chip against Liverpool was the pick of the bunch this month. Goals from Bruno Fernandes, Raphael Varane, Leah Galton, Martha Thomas and Ryan Bennett were among the options for Goal of the Month.

There is no catching Garnacho once he breaks forward into space. He shows a degree of composure to chip his effort over the Liverpool goalkeeper and it comes as no surprise that he is seen as one of the most exciting talents in the academy right now.

Hopefully he gets some minutes in the first team next season.