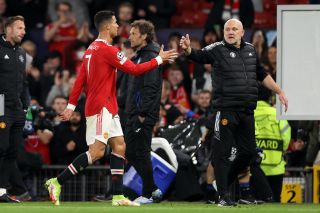 Mike Phelan will be one of the names to leave Manchester United’s coaching staff ahead of an internal shake-up this summer, according to reports.

Phelan was a player and assistant manager under Sir Alex Ferguson before returning to the club in 2019 as to help Ole Gunnar Solskjaer. However, now with Erik ten Hag appointed, the Dutchman will assemble his own backroom staff as he attempts to put United on a better track next season.

The Daily Mail claims Phelan will not be in the dugout alongside Ten Hag.

On top of that, first-team coaches Chris Armas and Ewan Sharp are set to leave, along with psychologist Sascha Lense.

Lense had a difficult role because he came in after Ralf Rangnick. The first-team players felt they couldn’t open up to someone they didn’t know after he joined the club on such a short-term basis.

It has already been confirmed that Mitchell van der Gaag and Steve McClaren will be Ten Hag’s assistants, with plans for a new first-team coach to join the staff.

McClaren is a good replacement for Phelan as someone who knows what it takes for United to be at the very top.