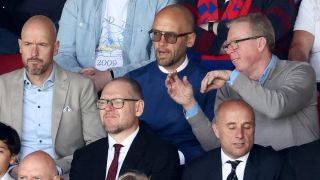 When asked about whether it was a dream to manage a Premier League club, Erik ten Hag gave reporters a no-nonsense answer.

“I’m not a dreamer,” the new Manchester United manager told MUTV. “I live by the day. I give my best and I make my decisions based on clearness and logic.

“We need a good concept and we need the right people around. When we give everything we have, every day, then we will get success.

“Then you see where you end up. Live by the day and focus on titles and don’t dream about other things that can happen in the future.”

This gives us some insight into how Ten Hag will approach the United job. He is calling on the players to give everything they have in order to put the team in the right direction moving forward.

Manchester United already have a fantastic history but there is no reason why we shouldn’t have a promising future, unless the Glazers and their puppets marginalise Ten Hag in the coming years, like they did to previous managers.

I hope Ten Hag gets the backing he deserves, and it sounds like he needs a few hard-working players recruited this summer.

It’s crucial that Ten Hag has the right people around him and he will know from conversations with Louis van Gaal how bad things got when Ed Woodward had a greater influence on operations at the club.