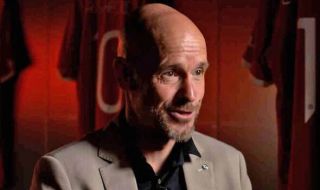 Erik ten Hag has his work cut out for him at Manchester United.

Everyone is excited to see what the manager will bring, and it shouldn’t be hard to get better results next season, with United finishing sixth in the Premier League, on top of a five-year trophy drought.

Speaking about how he plans on working over the coming months as United manager, Ten Hag told club media via MUTV: “First, we have a break.

“We will start pre-season on 27 June and I will get a few of the squad, [a few] of the individual players.

“In certain positions we want to renew the squad, but as I said, one year ago, this squad was second in the league, so there is potential and I’m really looking forward to co-operating with the squad.”

Of course, the entire squad won’t be together until July, due to the international football that is scheduled over the summer.

The Reds will travel to Bangkok, Thailand, Melbourne, Australia, and Perth, Australia.

United take on Liverpool on 12 July at the Rajamangala Stadium in Thailand’s capital. The squad will then fly to Australia where they will face Crystal Palace, Melbourne Victory and Aston Villa.

Moreover, one football executive claims United will not play any pre-season friendlies in England this summer. Preston North End director Peter Risdale explained why on the From the Finnery Podcast, saying (cited by the Manchester Evening News): “We had lunch with Manchester United the day of the Fulham away game (April 19), we met them down in London.

“Sadly, their new head coach doesn’t want to play a pre-season friendly in this country before flying to the Far East, so we had got a date in for that game which has regrettably been cancelled.

“There’s still a commitment to play them some time in the future. The calendar this year isn’t ideal because the Premier League starts a week after us – which means they’re all arriving back from their pre-season tours the Saturday (July 30) we kick-off.”