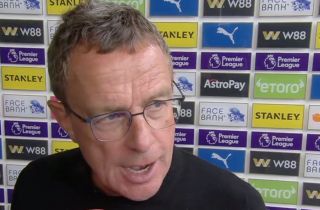 Ralf Rangnick has stressed on a number of occasions that Manchester United could turn things around in their favour with better recruitment.

The German took charge of his final game as United manager on Sunday as United were beaten 1-0 by Crystal Palace at Selhurst Park.

Despite the defeat, United clinched a spot in the Europa League which means we won’t need to worry about playing Europa Conference League football next season. Rangnick spoke to Sky Sports after the game, saying: “It’s obvious that the team needs reinforcements.”

Ralf Rangnick reacts to Manchester United's 1-0 defeat to Crystal Palace & looks ahead to next season & the appointment of Erik ten Hag. pic.twitter.com/Pz7vo4Hg1e

The 2021/22 season has gone down as United’s worst ever in Premier League history as the Reds recorded their lowest-ever points tally since 1990.

According to the Athletic, Rangnick has already made his feelings clear to the hierarchy about the mistakes they’ve made in the past. He questioned why a replacement signing for Nemanja Matic has not been made because everyone knew this would be his final season at Old Trafford.

On top of that, Rangnick is confused by United’s decision to spend around £90m on Amad Diallo, Facundo Pellistri and Donny van de Beek instead of bringing in a proven player who would be able to secure a regular role in the team. All three of those players spent time out on loan this term.

Erik ten Hag watched the 1-0 defeat at Selhurst Park from the stands. He is expected to continue his meetings with United this week, while a conversation with Rangnick will be arranged in due course.