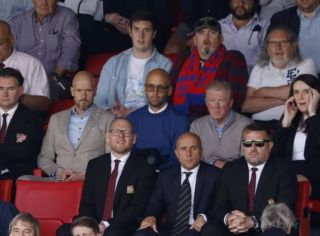 Manchester United have confirmed the arrival of Mitchell van de Gaag and Steve McClaren as part of Erik ten Hag’s backroom staff. The pair will join as assistant coaches.

Former England manager, McClaren, returns to Old Trafford where he worked as Sir Alex Ferguson’s assistant between 1999 and 2001. He has not been seen in a coaching role since he managed Queens Park Rangers in 2018/19, although he did work as a technical director at Derby County for nine months, too.

McClaren has previous experience of working with Ten Hag as the Dutchman acted as the former Middlesbrough manager’s assistant at FC Twente.

Then there is Van der Gaag, who spent the last year as Ten Hag’s assistant at Ajax, so he is bringing at least two key members with him for his biggest job yet.

Van der Gaag previously worked as Ajax’s reserve team for two years and he will be able to start work at United once he obtains a UK work visa. He also had a spell as a player at Motherwell in Scotland.

Together they will hope to have a positive influence on the team along with Ten Hag, but fans are expecting to see lots of changes this summer, and for new players to improve matters on the pitch. All three were at Selhurst Park on Sunday to watch United lose their final game of the season against Crystal Palace.

However, according to ESPN, Ten Hag has not ruled out making further appointments to his coaching team but first he plans to assess what staff are already employed by the club.

In a message to the players, the new manager has warned them that they must come together and “co-operate” if the team are to challenge for the biggest honours.

“Everywhere I was in my career, I have high demands on my players. I expect them to fight and give 100 per cent,” Ten Hag said after being unveiled as United’s new manager.

“We have to do better and they have to co-operate. They have to be unified, to form a team, and to battle the opponent.”

It remains to be seen what the future holds for coaches like Chris Armas, Eric Ramsay, Mike Phelan, and Richard Hartis. All will have uncertain futures until Ten Hag makes it clear if any of them will be sticking around to help out next season and beyond.

In an interview last month, McClaren went into detail on what impressed him most about working with Ten Hag at FC Twente. He painted the picture of s upper-driven, hard-working manager.

“I said to Erik, ‘Have you got our first day organised?” Over the next two hours he talked me through six weeks of pre-season work. Every last detail was accounted for. Every document ready. Every drinks break planned. He would say, ‘There is 20 minutes here for you to do your specific season and then we do this.’

“I had never seen anything like it before or since. For both individuals and for the team the work was the best I had seen. The detail was logged even down to what the coaches would be wearing on each day, and that we would all come out together. He had planned what equipment had to be carried out and when it had to be brought back in.

“I would occasionally say to Erik during a session, ‘We just need that goal moving to the halfway line,’ and he would ask every player in the squad to do it. All 22 players. Everyone goals. That’s the way he likes it. His great strength lies not just in his attention to detail and organization.

“He has a clear philosophy of how he wants to play football; the environment he wants to create. The player progression programme was a key part of Twente. He has done that at Ajax too, for each player from the academy to the first team. You look at Hakim Ziyech and now Antony, a very good player who will be the next one to go.”