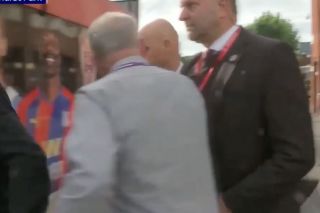 Erik ten Hag attended his first match as Manchester United manager on Sunday, but he was there to spectate rather than work. That is why he did not appreciate another desperate interview attempt from Sky Sports reporter Gary Cotterill.

The new manager watched his players from the stands at Selhurst Park as United lost 1-0 to Crystal Palace on the final day of the season. Thanks to Brighton beating West Ham in the other game, United did just about enough to clinch the Europa League spot.

Ten Hag will be aiming for a better season in 2022/23 and his work begins with the summer transfer market.

However, as Ten Hag left Selhurst Park on Sunday, he was approached by Sky Sports reporter Gary Cotterill.

“Welcome to the Premier League, Erik,” said Cotterill, who was ignored by Ten Hag.

The former Ajax coach will remember how the reporter in question recently tried to force an interview from Ten Hag’s car window, as seen below.

“Are you excited to get started?” was the follow up question from Ten Hag, who repeated the question before being nudged out of the way by security.

Embarrassing this from Sky, shouldn’t be trying to intrude like this. Delighted with our security staff here and how Ten Hag wants to deal with the media. #mufc https://t.co/yrIib1h7fO

Cotterill will act like a woodpecker for the foreseeable future, but it shows the pathetic levels that reporters will stoop to in order to get a quote.

Ten Hag will speak to the media later today.