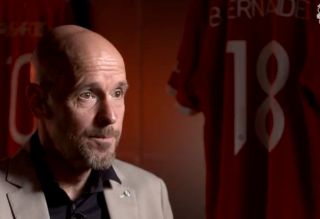 Erik ten Hag was in the stands at Selhurst Park when Manchester United lost 1-0 against Crystal Palace on the final day of the season.

Sat alongside football director John Murtough, Ten Hag was subjected to a toothless and uninspiring performance, just like what United fans have witnessed all season long.

United went from having expectations to challenge for the Premier League to settling for Europa League qualification. Next season, the new manager will be aiming to get us back into the Champions League, though a run in the cup would be nice because it’s been five years since we won a trophy.

Ten Hag has done his first interview with club media and says he has a long-term vision for United, with preparation already underway for the 2022/23 season.

Pien Meulensteen spoke with Ten Hag about his ambitions, mindset and philosophy.

“I really look forward to doing this job, at this club with massive history, and we want to restore it where it belongs,” Ten Hag told MUTV.

“First of all, we want to make the fans proud. Second, of course we are in this moment, the current situation is obviously not that good. It’s a big challenge. I want to build and construcy a team who are battling for each other, who are unified and who will get results. Also we are playing in the Theatre of Dreams. We want to entertain. But in the end, the intention is to play fantastic football. If we can’t play fantastic football, we still have to win.”

Ten Hag decided to terminate his contract at Ajax six-weeks early, so he was asked about his decision to immediately begin work at United rather than take a well-deserved break.

It’s clear from Ten Hag’s response that he is deeply motivated to turning things around at Old Trafford, which is music to our ears after such a shocking season.

The new manager is convinced that he will bring success back to United, adding: “It’s first: accept the current situation but also know one year ago, this club, this team was second in the Premier League. There’s potential and now it’s up to us to get that out. It’s a process, it will take time but I’m convinced we will come to that point where we get success. We have to work hard and it has to be based on the right philosophy and strategy.”

Ten Hag sounds like he will be demanding on his players. I suspect there will be a few who will hate the sound of that, but it then becomes his job to get those individuals out of the dressing room.

“I have high expectations from myself and that is also what I demand from my squad. They have to co-operate together and they have to give every day their best. And I would say, for me, good is not good enough. We have to do better.”

Ten Hag has never been to a game at Old Trafford, but he knows the history of our great club.

“I know the history of Man United, I know the big times and the audience, the vibe that can be around Old Trafford. I watched them in their big times, when Sir Alex Ferguson was manager, during the really successful times when they won titles and were dominating Europe. But also before Sir Alex, Man United was a really big club and I know names like Busby and Charlton that gave Man United a presence to the outside world from winning, and winning in a spectacular way, winning so they entertain people. What stays with me is there was always a fighting culture. They fight together and they get success.”

Finally, Ten Hag squeezed in a promise that he will deliver success.

“I’ve been aware of the massive presence and the massive audience around Man United. It’s all over the world, so I’ve been aware, and I will do my best and take responsibility to deliver them the success they need.”