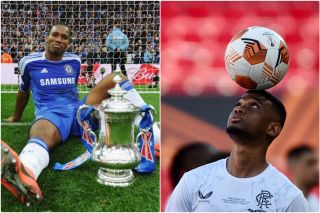 Didier Drogba has sent an inspirational message to Manchester United winger Amad Diallo, who will reflect negatively on his season-long loan at Rangers.

The winger didn’t get anywhere near enough playing time this season, as he sat on the bench as an unused substitute in the Europa League final defeat against Eintracht Frankfurt, but Amad was named in the starting line-up for the Scottish Cup final win over Hearts at Hampden Park.

Amad not only started the match but he got 63 minutes under his belt.

Reflecting on the Europa League defeat and the Scottish Cup win, Amad took to Instagram: “I felt so bad about the loss of my second Europa League final, but today a new page in my career has begun and I thank God for everything. We are the champions.”

Drogba commented below, adding: “The future is YOURS @amaddiallo19 keep your head up and trust God.”

It will be interesting to see what happens with Diallo and his immediate future. Erik ten Hag will soon take charge of the team when they begin preparations for the pre-season tour, and the new manager might want to give players like Amad the chance to express themselves on the biggest stage.

However, coming from a year in Scotland, where he couldn’t get regular game time, I have my concerns.

The 19-year-old made two starts and three substitute appearances in the Scottish Premiership this season – scoring one goal.