Manchester United goalkeeper is close to joining Newcastle United in a summer move, according to reports. The 25-year-old has not featured in the Premier League this season and is on the hunt for regular minutes.

Henderson emerged as Ole Gunnar Solskjaer’s first choice as goalkeeper at the end of last season but an injury sustained with England coupled with disruption to pre-season due to COVID-19 has halted his progressions.

Since last summer, he has grown increasingly frustrated on the bench and has made just three appearances in all competitions this season, one in each cup tournament.

Henderson signed a new long-term contract in 2020 but he could be about to seal a move away from the club, with reports of a deal being close with Newcastle being reported.

That’s according to the Manchester Evening News, who say that Henderson is closing in on a move to join Eddie Howe’s side this summer. 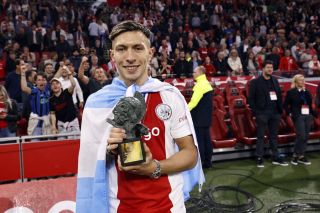 As per the report, Henderson traveled to Newcastle on Wednesday for talks with the Tyneside club, with discussions over a season-long loan taking place but a permanent transfer has not been disregarded.

Should the deal go through, it will put an end to six months of speculation following his collapsed transfer in January, also to Newcastle.

SN’s verdict…
Henderson’s rise from the academy, all those loan spells, and his eventual return to United have been thoroughly covered on Stretty News and it’s unfortunate to see a promising goalkeeper leave, should the reports be accurate.

David de Gea’s stellar form this season is, however, undeniable and it’s hard to argue in Henderson’s favour. Erik ten Hag, the incoming manager, could be forgiven to stick with United’s player of the season.

At Newcastle, Henderson is likely to become the first choice instantly and United will get compensated nicely – an aspect of summer transfers the hierarchy has failed with for too many years.