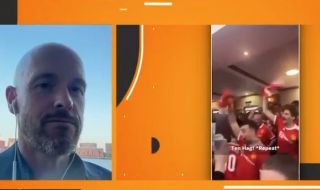 Erik ten Hag either hates the chant or he is taking time getting used to the focus that will be on him as Manchester United manager.

The Ten Hag chant that aired a few weeks ago got a mixed reaction from a lot of United fans on social media and, yes, we agree that it is a bit cheesy.

Ten Hag appeared on Dutch TV tonight after beginning work at United. He decided to terminate his Ajax contract six-weeks early when the Eredivisie campaign ended at the weekend.

The Dutch coach wrapped up his third Eredivisie title a week ago but now turns his attention on fixing the mess that exists at United. As fans, we know that it will also take a lot of backing from the board.

You can tell by his reaction below (via Ziggo Sport H/t @TheEuropeanLad) that Ten Hag doesn’t really know what to make of the chant. Hopefully someone comes up with something a bit more creative, and with an actual ring to it, before the new season kicks-off.

Let us know what you think of the chant in the comments.