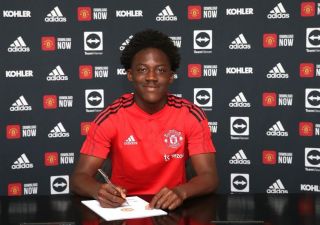 MEN reporter Samuel Luckhurst claims Mainoo has signed his first professional contract at United, labelling him “possibly the best prospect of the Class of ’22.”

However, it has not yet been noted how long his contract will last at the club, but we are sure that will become public knowledge in the near future.

Good to see Kobbie Mainoo get his first professional contract at #mufc. Possibly the best prospect of the Class of ‘22. Suspect there will be other deals/renewals after Youth Cup success. Plenty of other exciting talents.

There are a number of exciting talents in Travis Binnion’s U18 squad, so United are expected to be busy dishing out more contracts to youth players in the coming weeks.

The outstanding Stockport-born midfielder joined Binnion’s side in 2021 before excelling throughout the season, scoring twice in United’s run to our record-breaking 11th triumph in the FA Youth Cup.

There has been a shortage of high quality midfielders coming from the academy in recent years, so hopefully next season we’ll see James Garner get some minutes in Erik ten Hag’s side.

That would give the likes of Mainoo, Alejandro Garnacho and others a path to follow for the future.

We hope they all have bright futures ahead of them at the club.