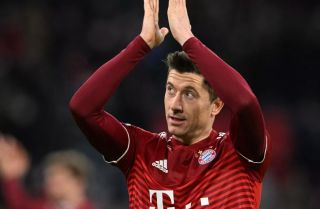 While it is understood that Bayern Munich striker Robert Lewandowski favours a summer move to Barcelona, there will be Premier League clubs interested in signing the Polish goalscorer if recent reports are to be believed.

According to the Guardian, Chelsea could join the race to sign the 33-year-old, who faces an uncertain future at Bayern as we approach the transfer window. The same report claims Lewandowski has long been interested in playing in Spain and sources have indicated that he has verbally agreed a 3-year contract with Barcelona.

Bayern must decide whether they should cash in on their talisman or risk losing him as a free agent next summer, which will sound very familiar to Manchester United fans, with Paul Pogba set to leave the club on a Bosman for a second time this summer!

The Bundesliga champions will take their time on Lewandowski to see if any serious offers come in. They may even set a deadline for interested clubs to sign him to allow them to replace their most prolific source of goals.

According to reports, Lewandowski’s potential transfer to Barcelona could mean that the club have to sell a number of players in order to fund the deal.

Fabrizio Romano stresses that such am ambitious signing like this won’t come cheap, and that could mean a club with financial problems like Barcelona must give in the transfer market before they can take.

More reports claim the potential arrival of Lewandowski could mean that Frenkie de Jong is offloaded by Barcelona, which would be very good news for United, if the Netherlands midfielder wants to work under Erik ten Hag again.

Romano has explained the situation in a recent column, writing: “De Jong has been on Ten Hag’s list for some time. They worked well together at Ajax, and the manager loves Frenkie, but the player’s priority is to play Champions League football next season.

“It won’t be easy for United either because Barcelona want at least €80-85m to sell De Jong, Xavi will do everything to keep him but it will depend on the financial situation of the club. We know there have been issues there recently, so that could mean further sales after Philippe Coutinho’s loan to Aston Villa was made permanent. We are still at the early stages, so keep an eye out.”