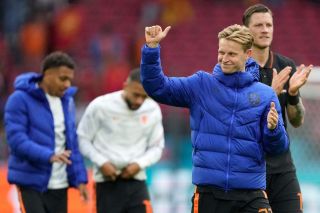 Manchester United have been given a boost in their pursuit of Barcelona midfielder Frenkie De Jong, with his manager, Xavi, failing to rule out the Dutchman’s sale.

De Jong has been heavily linked with a move to Manchester United this week, with one report even claiming that Erik ten Hag, the incoming manager at United, has contacted De Jong’s agent to gauge his interest in joining the club.

De Jong is a regular starter for Barcelona but has endured a troublesome season, with academy graduates Gavi and Pedri taking much of the plaudits for their impressive second half of the season.

Furthermore, Barcelona are in a dire financial state and were forced to let Lionel Messi leave last summer. Similar circumstances could force their hand in De Jong’s case, with Xavi now refusing to rule out a potential departure – a huge boost for Manchester United.

“For me he is very important,” Xavi is quoted as saying by the Evening Standard. “He has been a starter practically every game, except when he has been rotated due to tiredness, fatigue or competition. For me he is fundamental. But we all depend on the economic situation of the club.”

“Of course there are,” he added when quizzed on some players are ‘untouchable’ in the transfer market. “They are in my head. I have it clear. From there, we have to see what the [economic] situation is and our ability to maneuver.”

SN’s verdict…
Erik ten Hag is clearly keen on reuniting with De Jong at Old Trafford. The pair enjoyed a magical 18 months together in Amsterdam, which included that breathtaking run to the Champions League semi-final in 2019.

The prospect of signing De Jong also offers Ten Hag the ability to ease other players into his methods, with De Jong and Donny van de Beek already familiar at that point.

Certainly, the arrival of De Jong at United would make life easier for all of the players and above all else, the 25-year-old oozes quality and is an upgrade on the current options.