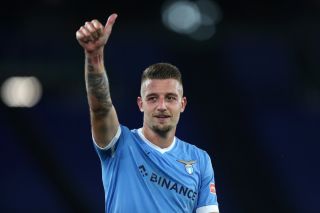 Manchester United are in the market for a midfielder this summer amid the exits of Nemanja Matic and Paul Pogba, who will both leave on free transfers this summer.

Donny van de Beek, the much-maligned midfielder, remains on the fringes but could be offered a lifeline following Erik ten Hag’s appointment.

United are, however, very light in that department and Sergej Milinkovic-Savic, the Lazio star, has been the subject of longstanding interest from United but a move has never materialised.

The Serbia international has just one year remaining on his contract in Rome and according to Roberto De Fanti, the Italian super-agent, a departure could now be on the cards and he has talked up a move to Old Trafford.

“I believe this summer could be the time that Milinkovic-Savic leaves Lazio and I won’t be surprised if the destination is Manchester United,” De Fanti wrote in his CaughtOffside column.

“I can say for sure that there are already whispers in the industry that he could move to Old Trafford in time for next season.

“Manchester United are obviously about to lose several midfielders of their own, one of which is, of course, Paul Pogba and I think when it comes to Milinkovic-Savic, particularly his characteristics, he would be a great replacement, as well as a great fit in the Premier League.”

Rumours linking Milinkovic-Savic to United in the past have been attached to ridiculous transfer fees but De Fanti has dismissed those suggestions, insisting that although his value remains high, it will be south of €100m.

“Although his valuation is going to be fairly high, when I hear things about his price tag being set at something crazy like €100m, I just know it will never be that much, especially because he has just one year left on his contract,” he added.

SN’s verdict…
Ten Hag will be desperate to bring at least one midfielder in and according to one report, he has already taken matters into his own hands by contacting Frenkie de Jong’s agent to gauge the midfielder’s interest in joining United.

Milinkovic-Savic is another top midfielder who will be coveted by more than one elite club this summer and United would do well to seal a deal for him.

The 27-year-old is a pillar in midfield for Lazio and losing him would be a sizeable blow for Mauricio Sarri’s side but their disappointing domestic season could force their hand.