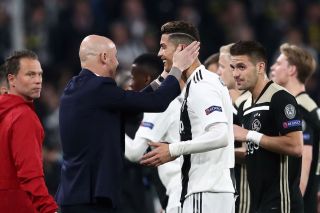 Erik ten Hag is set to walk through the doors at Carrington this summer, having been announced as Manchester United’s next permanent manager last month.

The 52-year-old is still seeing through his duties with Ajax and will be leaving on a high note following their Eredivisie triumph this week – their third consecutive league title.

Ralf Rangnick’s six-month spell in charge of United has been disastrous but Cristiano Ronaldo has enjoyed his best scoring run under the German.

The 37-year-old has now commented on Ten Hag’s appointment at Old Trafford, insisting he’s ‘excited’ and looking ahead to next season.

“What I know about him is he did a fantastic job for Ajax, that he’s an experienced coach,” Ronaldo told the official Manchester United website.

“But we need to give him time. Things need to change the way he wants. I hope we have success, of course, because, if you have success, all of Manchester is going to have success as well. I wish him the best.

“We are happy and excited, not only as players, but the supporters as well. I wish him the best and let’s believe that, next year, we are going to win trophies.”

Ronaldo has one year remaining on his contract at United and there have been rumblings about a potential exit, with United missing out on a place in next season’s Champions League potentially a deciding factor.

He does, however, hint that he will be sticking around for the full length of the two-year deal he signed last year, insisting that the goal for next season is to secure silverware.

SN’s verdict…
Ten Hag has quite the job on his hands at United and the last three months have showcased just that. A striker is said to be on his wishlist but that’s most likely down to United’s lack of numbers in that department.

Ronaldo is showing no signs of slowing up and it’s fair to assume that Ten Hag would be keen on keeping the club’s top scorer around.

Only time will tell whether Ronaldo has any plans on moving on but from a supporter’s perspective, keeping him for another year could make Ten Hag’s transitional period just a tad bit easier.