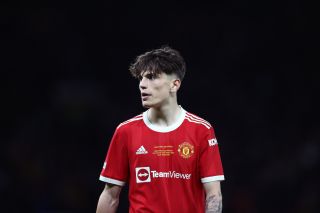 Alejandro Garnacho has enjoyed a stellar season with the academy sides and he even made his first-team debut as a substitute in last month’s 1-1 draw with Chelsea – a proud moment for the Argentinian.

The 17-year-old joined United from Atletico Madrid in 2020 and has wasted no time making a name for himself at Old Trafford. His heroics this season, which include a brace in the FA Cup Youth final earlier this week, look set to earn him a fresh deal at the club.

That’s according to the Daily Mail, who claim that he will become the latest United youngster to sign a new deal shortly after making their first-team debut, with Marcus Rashford and Anthony Elanga among the previous ones to do so.

Garnacho was also named Manchester United’s young player of the year this week and to add to his spectacular campaign, he was offered a taste of senior international football after being called up to the Argentina squad in March.

SN’s verdict…
It’s safe to say that this season has been quite the campaign for Garnacho and his rise to stardom is rare. Ralf Rangnick has been reluctant to give United’s youngsters minutes in the closing games of the season so his consistent naming of Garnacho in matchday squads is quite telling.

Rangnick has a world-class eye for talent and although he did not play any part in bringing him to United from Spain, his decision to promote him to the first team for training sessions could do him the world of good.

Garnacho could follow in Elanga’s footsteps, who became a first-team regular shortly after signing a new long-term deal at the club.