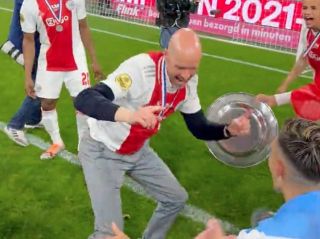 Ajax won their 36th Eredivisie title last night after beating Heerenveen 5-0 and we all got a glimpse of Erik ten Hag’s dance moves.

The next Manchester United manager, Ten Hag, showed off his dance moves after lifting his third Eredivisie title with the club.

Ten Hag was spotted dancing with his players after they threw him into the air a couple of times.

It has been labeled ‘the last dance’ by Ajax’s Twitter account because the club will soon say goodbye to one of its great managers.

Edwin van der Sar mentioned Ten Hag’s next job in his speech on the pitch and wished his colleague the best for the future.

We hope that Ten Hag can share moments like this with his players at United in the coming years.