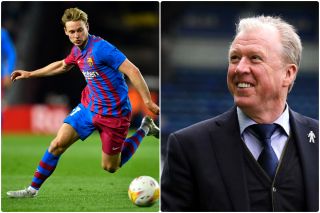 Erik ten Hag wants to sign two midfielders, a versatile forward and a centre-half this summer.

It is understood that a meeting was held in Amsterdam today to discuss future transfer targets.

According to The Telegraph, John Murtough caught an early flight out to Amsterdam to run through the club’s latest transfer plans in detail before flying back to London in the afternoon.

It is noted in the report that Ten Hag wants to sign two midfielders, a forward and a centre-back as part of an overhaul of the squad.

On top of that, Barcelona star Frenkie de Jong is on the transfer list.

The Netherlands international enjoyed success whilst playing under Ten Hag at Ajax and he could be set to reunite with his former manager at Old Trafford.

The report adds that Barcelona need to sell players to help fund other deals given that the club has struggled financially in recent years.

De Jong’s preference would be to stay at Barcelona but, if he is forced out of the door, it is suggested that he would prefer to join a club that can offer Champions League football.

That will be a stumbling block for United after failing to qualify for Europe’s most prestigious competition for a fourth time in nine seasons. And, with one game left to play in the Premier League this season, we still don’t know if United will be competing in the Europa League or Europa Conference League next season.

It sounds like an uphill challenge for United as Jong will have plenty of options if he is to leave Camp Nou this summer.