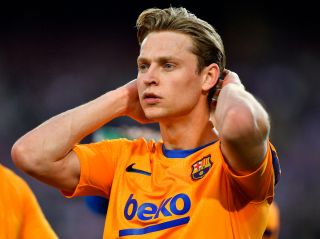 There have been rumblings about Manchester United’s interest in Barcelona star Frenkie de Jong and they’re gathering momentum as we edge closer to the opening of this summer’s transfers window.

Erik ten Hag is set to take over from Ralf Rangnick this summer and naturally, transfer links to some of the stars from his spectacular Ajax side in 2019 were going to be made.

He already has one at his disposal. Donny van de Beek has endured a disastrous two years at United but Ten Hag’s arrival could revitalise the midfielder.

According to reports, Manchester United are now pursuing a deal to sign Frenkie de Jong from Barcelona, one of Van de Beek’s teammates at Ajax under Ten Hag.

That’s according to The Telegraph, who add that United are looking to sign two midfielders this summer. Manchester City have also been linked with a move for De Jong but they are said to have distanced themselves from a deal.

As per the report, United could be facing an uphill battle. Although Barcelona could be forced to cash in due to their financial restrictions, he is believed to prefer to join a Champions League club if he leaves. United have had dialogue with De Jong’s representatives but a transfer is far from certain at this stage.

SN’s verdict…
Manchester United’s disastrous Premier League season offers them very little pulling power compared to some of the other clubs in the Premier League.

With a season outside Europe’s fine dining table, the Champions League, an attractive sporting project has to be pitched and United will hope they have the tools to do just that with Erik ten Hag at the helm. Ten Hag’s relationship with De Jong could also be a factor, however.

Nevertheless, the midfield is a real cause for concern at the Old Trafford club and whether it’s Frenkie de Jong or someone else – they are in dire need of strengthening.