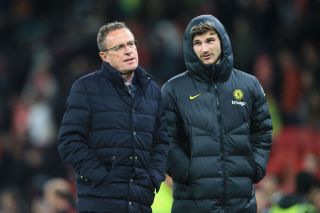 Manchester City’s 5-1 thumping of Wolves on Wednesday evening has ensured that Manchester United will be playing European football next season – something that has seriously been in doubt for the last couple of weeks.

United’s demoralising 4-0 defeat to Brighton last weekend confirmed that Champions League qualification was out of reach but that blow has been eased this week.

Erik ten Hag, who is set to replace Ralf Rangnick at the helm at the end of this season, will be overseeing another campaign in the Europa League or potentially a first-ever participation in the Europa Conference League.

Read more: Cristiano Ronaldo breaks another record after Player of the Month award

Wolves’ loss to Manchester City means that the Midlands club can no longer overtake United in the table, and now United need West Ham to drop points if they plan on taking part in the Europa League.

United will land on 61 points if they win their final game against Crystal Palace but two wins out of two for David Moyes’ side will mean they finish 6th – the final Europa League place.

They could be about to cash in another favour from Manchester City, who play West Ham this weekend. Should the Hammers drop points against United’s rivals, a win against Crystal Palace would be enough to ensure Europa League qualification.