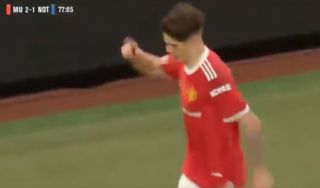 Alejandro Garnacho not only scored the penalty, he also won it after being fouled inside the box.

Manchester United currently lead 2-1 with just a few minutes left on the clock in the FA Youth Cup final against Nottingham Forest.

However, the visitors at Old Trafford equalised after the break but United kept trying to find ways to break past Forest’s defence.

Garnacho did well to win the penalty but he was never in doubt as he ran towards the ball.

The goal puts United in a strong position to win their 11th FA Youth Cup.