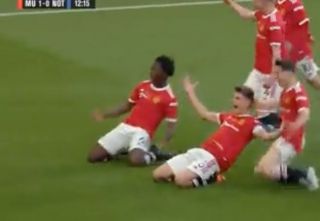 Manchester United U18s have opened the scoring against Nottingham Forest in the FA Youth Cup final at a packed Old Trafford.

Travis Binnion’s young side would have felt nerves before the match but they’ve played really well so far – firmly on top of their opponents from the early stages.

It only took 13 minutes for United to open the scoring through Rhys Bennett.

Sam Murray delivers a top-quality cross from a free-kick for Bennett to header the ball into the back of the net.

You can see from the footage below that the power from the free-kick helps drive the ball past the goalkeeper. It was a stunning free-kick and it was finished brilliantly.

The defender, who captains United tonight, is Manchester born and bred.

My only concern from the first-half is that we are giving away too many free-kicks in dangerous positions, despite knowing how crucial they can be at the other end of the pitch.

Hopefully the young lads can build on their one-goal lead.