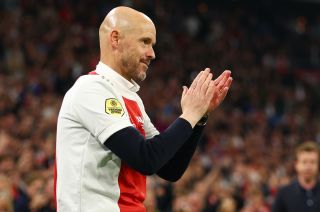 Ajax defeated Heerenveen 5-0 to secure their third Eredivisie title under Erik ten Hag, who will now turn his attention to managing Manchester United at the end of the season.

Goals from Nicolas Tagliafico, Steven Berghuis and Sebastian Haller had Ajax three goals ahead at half-time. After the break, Brian Brobbey and Edson Alvarez completed the goal fest as Ajax wrapped up the league title.

Since taking over at Ajax, Ten Hag has won three league titles in four seasons completed. That is an impressive record and he is a huge job ahead of him at Old Trafford.

Ten Hag is now expected to say his final goodbyes to everyone at Ajax in the coming weeks.

He will already be aware that Ajax are a big club, but soon he will be managing a completely different animal. The pre-season tour could be an early wake-up call when he sees just how big United are across the world.

We would like to send a message of congratulations to Ten Hag and Ajax on another incredible campaign.