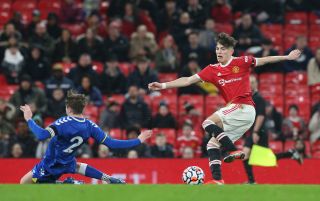 It’s the game a lot of Manchester United fans have waited for this season, with the club seeking an 11th triumph in the FA Youth Cup, with Nottingham Forest’s U18 side coming to Old Trafford.

A bumper crowd is expected at Old Trafford to see the two young sides face off in the eagerly awaited final.

United have home advantage for the final and some of the senior players have been sending their messages of support ahead of kick-off.

It will be a first-time appearance in the final for Forest and they are expected to bring over 5,000 fans to Old Trafford tonight.

The last time United reached the FA Youth Cup final was in 2011 when we beat Sheffield United over two legs with a team that included the likes of Jesse Lingard, Paul Pogba and Ravel Morrison (Harry Maguire was part of the opposition).

Hopefully the lads have something to celebrate tonight!