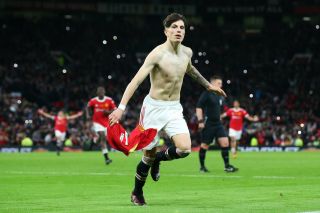 Alejandro Garnacho scored twice in the second half to put things to bed as United responded to a late first half equaliser from Forest.

It started well with United on the putting pressure high up the pitch with Mather, Garnacho and McNeill always staying alert. However, it was Rhys Bennett who gave United the lead after a free kick where the captain made no mistake to send it home. United started to feel comfortable with the scoreline and Nottingham Forest were starting to get into the game.

The visitors kept pushing high up and they came close on a number of occasions, but Vitek reacted really well. However, a few moments later as teams were preparing to close things, Vitek did not do enough to keep the ball out and it slipped.

In the second half, things shifted in Forest’s way as they were the ones trying the hardest, putting United under pressure constantly.

However, United were quite resilient, always alert and never letting go of the defence. As United made two changes, things were coming good for them finally in the second half. Garnacho was pressing high up and a foul that seemed off the penalty area was given a penalty from the referee.

Garnacho converted the penalty and minutes later he closed any chance there was for Forest to force extra time by scoring his second of the game.

After seven minutes of extra time, the final whistle is heard and Manchester United are FA Youth Cup winners for the 11th time in their history. With that presence in the stands, surely these players have made many proud in their success.

There’s a bright future ahead for these lads and we hope you are here for their journey.